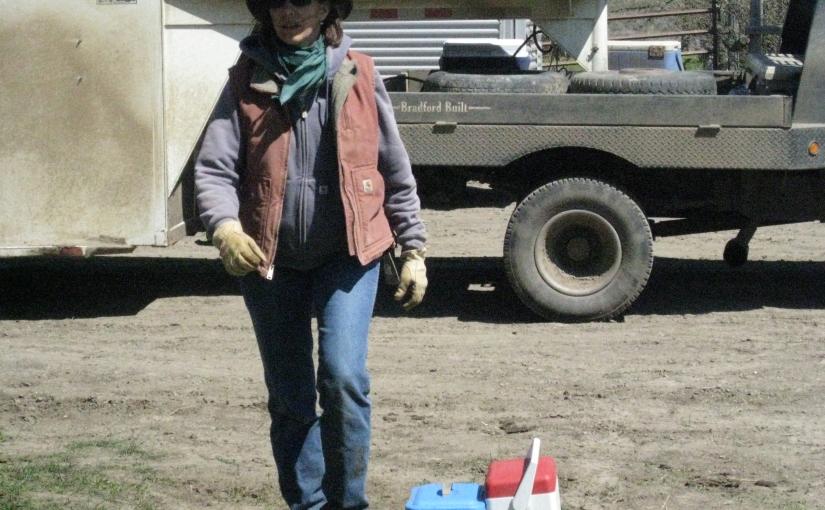 The winter of 2003 was nothing like this winter … until it was. Dad and I were blissfully enjoying El Nino or La Nina, whichever cycle keeps February mild. We were dry, warm, and worry-free heading into calving. We had extra hay, old grass, and unfrozen water supplies. There had been no shoveling or putting on of chains and while drought loomed large, we could not complain about the ease with which we were sailing through winter and into calving.

Then the excrement hit the fan. The weather service warned us about an Arctic blast but complacent and disbelieving we waited. Overnight the temperature plunged. We awoke to several inches of snow and a howling icy wind. We had our old cow bunch a few miles from home in a pasture with a heavily timbered ridge running along the northern property line. The fence halfway up the back of that ridge was more of a suggestion: two strands of barbed wire running east and west along the property line between steep grass slope going up and volcanic rock slide below. The ridge’s south face is rock wall and the north is steep grassy slope veined with deep coulees, rock outcroppings, and that stupid fence. Our cows were not as complacent as Dad and I. They could feel the weather coming and climbed up behind that damned ridge. There was nothing to do but go after them.

The elevation of the game trail up behind that ridge happens fast. Because of the south-facing rock wall, one must navigate around the west end of the ridge along the fence, over boulders and tree roots, and low hanging unbreakable branches the size of a man’s arm. At one point, a seemingly vertical section adjacent to the barbed wire fence forces a scrabble-lunge maneuver from your horse. I always want to get off and walk because I feel safer on my own two feet. I figured dismounting from a skittish horse on a side hill while wearing insulated coveralls and bulky snowboots would have been stupid. Once over that sharp rise, the back of the ridge gets less treacherous but continues to rise steeply to the southeast. There is no flat place unless you go completely to the top or over along the east fence in heavily timbered coulees. The trail is challenging on a good day but we could not hear or see above the screaming wind and drifting snow. My tough little mare Dixie is a brat, but she has a big heart and a lot of “try”. Dad’s little mare Roanie, is a machine! They are both in snow up to their knees and so far we do not see a single cow track but we know there have to be thirty or forty head up there somewhere. The horses labor along across the slope stumbling and slipping until we reach the next rocky ridge that runs perpendicular to our path and the fence. Neither of us believes the cows have gone higher so we break over into the timbered coulees that fan out to the east from our position.

The cows are so well ensconced in the brush we have to check each coulee for them. Many are hunkered under overhanging tree branches and bunched tightly in the snow wells for shelter. Finding each pair is an emotional roller coaster. The calves are up but cold, wet and miserable next to their mothers or frozen in a heap having slid downhill after birth from their mother’s attempts at licking some life into them. We have to get the potential calvers off that ridge. We would drive a few head out of shelter, go after others, and the first few would turn around and go back to their places. It is difficult to drive cows into a cold wind on flat ground let alone force them out on the side of a ridge, but go they must. Shouting and flailing the cows with our ropes, our horses biting first one then the next, we got them moving. I had one Hereford we called “Freight Train”. She was long, tall, and gentle as a dead pig. We managed to drive her and a couple other older leader cows and finally they all started wallowing back down the slope toward that break-over point. They knew where the trail ought to be and were attempting to stay in our tracks but the footing was treacherous. Ole Freight Train turned downhill toward that steep rise next to the fence and started sliding on the icy rocks. It was as if she were on skis. I expected her to plunge into the fence and disappear down the slide but she must have caught a toe on a tree root or something and managed to swing into the trail at the last minute. Mouth agape, I looked above me at Dad. Freight Train’s near disaster seemed a signal to the rest of the bunch. They began pouring off the nearly vertical west grade above me on the hill. Dad shrugged, shook his head, and turned his roan in behind them. The cows were trying to stay on horizontal paths around the end of that ridge, but that just took them onto steeper rock slides. There was nothing for them to do but go down. The last I saw of Dad and Roanie they were right behind them … and Dad was walking. I never wanted to appear weak or lacking confidence in front of Dad, but if he was walking, I was all for it! Cows were skidding and bumping into trees, but I figured if Freight Train could survive going down that slope, so could I. The next day, Freight Train had twins.

We were all rather stunned for a day or two afterwards and admittedly sorry to see winter arrive and remain deep into April. Dad, a genuine cowboy who had been in many a harrowing scrape before, always managed to make them sound like grand adventures. However, regarding that day, in the telling of it, he would shake his head, look off in the distance, and slightly shrug as if in disbelief — about what I shall never know. I have never pretended to know anything about training a horse, but Dixie was young and we were learning together. That day I also learned a little about Dad, my horse, and myself. I know I was scared, but my horse was all business. We lost only three calves to that storm. We should have moved them the day before and we felt bad about that but as is often the case with ranching, more is gained in experience than lost in revenue. Dixie is a helluva cow horse, the one you want when searching out baby calves, or bulls hiding in the brush. She is a brat, and a mutt, but I was glad to have her under me that day.