Does the term “classical guitar” conjure visions of dust motes dancing over half-lit stages awash in cigarette smoke or does it seem more likely such would occur in full concert halls festooned in red velvet and crystal chandeliers? Imagining some lengthy Bach piece in an obscure minor key?  Would you expect to hear an award-winning classical guitar virtuoso in a school lunchroom in Hobson, Montana? What? Wait … Hobson, Montana? 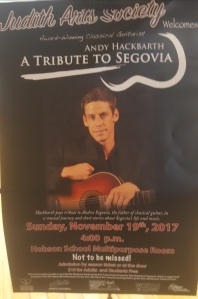 Andy Hackbarth, a Colorado native, and handsome personable young man holding a Bachelor of Music in classical guitar, appeared in Hobson with his tribute to “the Father of the Classical Guitar” on Sunday, November 18. Aside from the uncomfortable metal folding chairs, the stage, lighting, and sound system were surprisingly adequate. Thanks to the Judith Arts society, PO Box 254, Hobson, MT  59452, Andy’s tribute to Andres Segovia was both entertaining and educational.

Andy’s style of  sitting is similar to a traditional “Flamenco” player. (The socks were seasonal fun.) 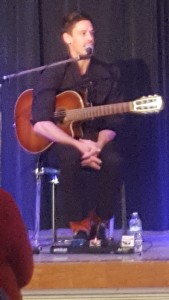 “Nah,” you may say to yourself, “I like country music.” Well, Andy Hackbarth also plays a mean rendition of most country tunes you can name (and invites you to sing along), writes his own, has country and classical CDs, points out that Chet Atkins was a classical guitarist, and will generally debunk any objections imaginable. When not touring, he is based out of Nashville and Colorado.

Classical guitar is mesmerizing and soothing and at one point the feral wind moaning through the window panes of the lunchroom seemed to add a certain spiritual quality.  Maintaining any sense of joy or tranquility (let alone hairstyles) when buffeted by our central Montana weather is challenging. Sometimes it beats about our ears with a vengeance whether we are participating in sports or just throwing hay to bovine. Andy Hackbarth’s concert banished all day-to-day concerns. Feeling cultured, avoiding the distraction of speaking to anyone, clutching my signed CDs, I hurried down to Tallboys Tavern for a glass of wine with Curried Walley, and allowed the experience to linger.

I recommend going online at http://www.AndyHackbarth.com and checking out his free 5-song sampler.  Or ask your favorite music source to play some. He is on YouTube, Facebook, Twitter and Instagram. Quality entertainment … in a school lunchroom … in a tiny town in the middle of Montana.  Go figure!

1 thought on “How to Hold Illusions in the Wind”

Art and Furniture and Hand-made items.