Every year in July, I put down my fencing pliers, stash the lawn mower and weed eater in the shed, turn my saddle horse up the creek, hook up my 1964 Honorbilt camper trailer, and journey to White Sulphur Springs to arguably the greatest music festival of all time. 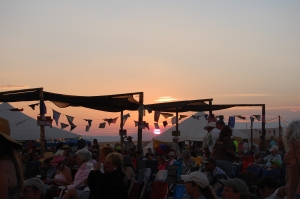 The first year I attended was six months after my Father’s death and I needed a different perspective. A casual reference from a friend led me online and I discovered the headliner was none other than Merle Haggard. The headliner comes on last, on Sunday evening, after the street dance and two days of impressively talented musicians from across the nation. I didn’t know any of that. I was going to see The Hag in person!

Founded (2011) by Sarah Calhoun, the Red Ants Pants company is dedicated to making work wear for women. That’s cool. I remember a time when I cussed Carharts company pretty loudly because I bought the pants and had to sew darts in them so they wouldn’t gap open around my waist. Apparently at that time, women didn’t need heavy duty insulated work pants. So, good on ya’, Sarah Calhoun. The Red Ants Pants store is located in White Sulphur Springs hence the music festival in the nearby cow pasture. White Sulphur Springs IS small town Montana with a single main street which is really just the highway. It doesn’t look much different than a hundred other small towns in Montana centered between vistas of large round bales scattered like dice between mountain ranges or expanses of golden wheat fields shoved up against river bluffs or across wide open prairie.

Camping on The Jackson Ranch a smidge outside White Sulphur Springs is challenging because the rest of the year it’s a cow pasture with an impressive assortment of rocks and holes. I figure if you can’t make it from the festival grounds back to your camper, you’ve had too much to drink! Seriously, I don’t know if it was all the people, the heat, the wine, or the two full days of amazing musical stimulation, but by the time Mr. Haggard was up, I felt either I would burst into tears or wet my pants from excitement. Nobody sat down. Everybody sang along. It was full-on amazing, and I was honored to see a country music legend in an extraordinary venue. I vowed I would never miss another Red Ants Pants Music Festival.

I wasn’t such a rookie last year and when the camp site concerts began I was there holding a couple of flashlights on The Last Revel, three guys who said they drove seventeen hours so they could play fifteen minutes on the side stage. But they won the people’s choice vote and will be on the main stage this year along with returning talent like Red Molly or first timers to Red Ants like Keb ‘Mo’, Lee Ann Womack, Nitty Gritty Dirt Band, Ryan Bingham, and Holly Williams to name a few.

I am already giddy with anticipation, so don’t try to contact me next week. I’ve got my 150 dollar Fender tuned and I’m gearing up for my favorite Corkscrew Adventure of all time. Ciao!

Art and Furniture and Hand-made items.