Sunday afternoon, Red Ants Pants Music Festival, White Sulphur Springs, Montana, and I am done! I’m hot and tired and if I were three, I’d rub grubby fists into my eyes and there would be dust smeared into the stickiness from my Italian Ice around my mouth. But I’m a full-grown woman and even though recalcitrant Ma Nature beat our pop-ups and canopies into mangled spiders with 40 mph winds Thursday night, increased prices and people tested my resolve to hear every band (I failed miserably), I resolutely attended, slumped in my chair, waiting for the next group.

Stamina is required. Without pacing yourself, you’ll never make it. It is also impossible to adequately review here every band so I’ll just hit the high points. My high came early on Friday night. True to Montana weather, Friday was beautiful after the storm. The Shook Twins, hailing now from Portland, Oregon, retro microphone and all, rocked their harmony with tempered folk-pop instrumentation. Followed by Lucero — a voice like Joe Cocker — a Memphis band that swings from moody blues to wild rock, there was little time to fill my wine cup. Next, with her melodic tones and song writing skills, Lee Ann Womack knows how to reach her audience. If you have never heard “I Hope You Dance”, crawl out of your cellar! She is just plain fabulous and a wonderful performer. Then a group about whom I knew nothing came on stage. Reminiscent of Boz Skaggs, Keb ‘Mo’, a three-time Grammy winner, lulled me with his guitar work and beguiling lyrics. Listening to the blues of Keb ‘Mo’ was like rolling the darkest richest wine around in my mouth. Like velvet, their four voices blended into smooth perfection. And yes, I bought the CD.

Saturday brought another full day beginning with The Cattle Women’s breakfast, yoga, a book sale downtown, talent demonstrations, hay wagon rides and (pause for effect) The Music. Del Barber, it was remarked, is as good a story teller as musician. Holly Williams showed off her song writing chops with the poignant lyrics “Waitin’ on June”, a song which had us all weepy. Her frank comments about her Dad, Hank Williams, Jr., and the subsequent song about her Mom’s grace under such conditions proved her a remarkable talent. Red Molly, a return group from 2014, showcased their pure three-part harmony and (along with my grandmother) gave me added motivation to learn the slide guitar. The Turnpike Troubadours, hailing from Oklahoma, showered us with a gutsy roots-rock-folk-country sound. I’ll be downloading some of that to my phone! And last but not least, Ryan Bingham brought Saturday night to a thunderous climax as the dust from the mosh pit rose above the crowd and dissipated into the lavender twilight. 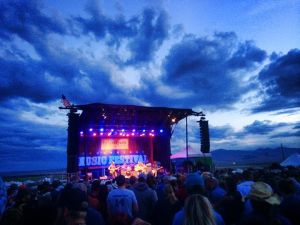 Then it was Sunday and I was pooped. Inspired Saturday night, we played our own instruments in our camp and, as I’ve said, you have to pace yourself. So at noon when The Easy Leaves came on, I was hunkered in the shade of a pop-up behind the crowded seating section. I loved their sound so much I jostled my way toward the stage to get a visual, but had returned to the shade, slurping my Italian Ice, when Sarah Calhoun, Red Ants Pants founder, announced the next band. She said we might not have ever heard of them, but we would not forget them. Intrigued, I re-claimed my seat closer in. Parsonsfield is a five-piece Americana band from Connecticut whose music is more than bluegrass and folk. Their Appalachian sound (including a saw) broadens into a modern and edgy high-energy performance that will raise goose flesh! If you can sit in your chair while listening to Parsonsfield, you are, as my Dad used to say, “Dead from the ass both ways!” Thrilling and provocative and laugh out loud enjoyable, I forgot how tired I was, jumped up and down, sang along, and purchased their music! I wasn’t ready for their set to be over, but they primed my interest for the sweet lyrics and melodies of Bruce Robison and Kelly Willis up next. Finally, this year’s Headliner was the Nitty Gritty Dirt Band. As seasoned performers, they know how to engage an audience and through their music for a few minutes recall the feeling of the bygone decades of our lives. They, along with another light show from Nature, closed down 2015’s Red Ants Pants Music Festival in fine fashion.

I’m always dazed when I leave, inspired, motivated to delve into music further, to get it on me, to wallow in tempo, harmony, lyrics; wearing it into a familiar soft wrap around my heart. That’s what music should be. It should move you, touch you, and the diversity of talent at the Red Ants Pants Music festival will do just that. I’m already wondering who will perform next year.

Re-inventing yourself can be tricky. After Dad passed, ranching wasn't any fun without him, so my 87-year-old Mom, three cats, two horses, and the dog came with me to twenty acres in the middle of Charlie Russell country. (C.M. Russell's horse probably pooped in my barn.) Now that Mom has joined Dad in the universe, I am full-on into the next chapter. Stand by for Montana entertainment of note and garden and landscape challenges! View all posts by Crazy Aunt Tracy

2 thoughts on “Just When You Think You’ve Had Enough”